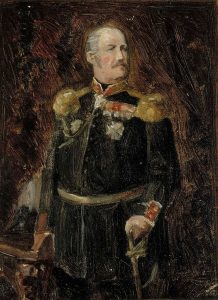 Son of Deputy Chancellor, Count Johan Fredrik Aminoff and Eva Matilda Bruncrona, Aminoff was educated in Uusimaa and Turku, where he passed his matriculation examination. He then attended the Page Corps in St. Petersburg graduating in 1823. He was assigned as a Sergeant in the 1st Turku Battalion of the 1st Finnish Infantry Regiment. In 1825 he was promoted to Ensign and transferred to the 3rd Hämeenlinna Battalion of the 2nd Finnish Infantry Regiment before transferring to the Finnish Life Guards Regiment the following year.

Aminoff was promoted in 1827 to the rank of Lieutenant and in 1828 he went on campaign with his Regiment during the Russo-Turkish War of 1828–1829. In recognition of his service during the conflict, he was promoted to Senior Lieutenant.

In 1830 he once again went to war with his unit. His experiences during the Polish campaign are well attested due to his correspondence with his father and his diary, both of which are now part of the Finnish National Archives. His first encounter with the enemy took place near the village of Śniadów on 18 May. He was acting as a Company Commander due to his Captain temporarily taking charge of the Battalion. As he was forming up his Company, the Polish artillery opened fire, shells exploded among the column and Aminoff was thrown to the ground by the force of a nearby explosion. He later recalled;

“I thus suspected nothing, but unexpectedly a shell hit into the midst of
our column, killing two soldiers and exploding very near to me and one
ensign. I hardly managed to notice that he was wounded, as I fell down on
my own chest, yet not with much pain. My cloak was torn and the left
side of my overcoat was in a thousand pieces. It was clear to me that I had
been seriously wounded.”

It later turned out that he had only suffered minor fragmentation wounds and after getting attended to after the battle he made a swift recovery. This though was not to be the last wounding he would receive during this campaign. His next action would be the Battle of Tykocin. Back to commanding his platoon, he took part in the rearguard action, holding back the main Polish army in order to allow the Russian Army under General Hans Karl von Diebitsch to retreat. Together with a platoon commanded by fellow Finnish Lieutenant Carl Erik Fabian Edvard Knut von Baer, and supported by two cannons, Aminoff held off the Polish advance for four hours. The fighting became intense and soon ammunition was running low, forcing Aminoff to order a bayonet charge. He would later recall the moment that he heard of the death of a young Finnish ensign, 19-year-old Peter Carl Thesleff, and how it truly affected him. The battle would always remain significant to the young officer, often being recounted later in his life. He would receive a wound to his arm when the Russian army was forced to retreat to the town. Luckily the wound was clean and no permanent damage was inflicted. He also found himself lavished upon by fellow Finns, including Colonel Ramsay of the Finnish Guards’ Rifle Battalion who arranged for Aminoff to recover in the more comfortable surroundings of Białystok.

He would spend a few weeks recovering, remarking the good food and comfort he received in the town, before returning to his unit. The Finnish Life Guards were part of Colonel Nikolai Lukash’s left column and they were to be held in reserve until Fort 74 had been broken and thus to help push through the assault.

For his actions during the war, Aminoff was awarded the Order Virtuti Militari 4th class and the Gold Sword for Bravery. He was also promoted to Staff Captain. He would continue to serve with the Finnish Life Guards, becoming a full Captain in 1836, until the death of his brother in 1838. Now the oldest of the Aminoff’s, he was elevated to Count and inducted into the Finnish House of Nobility. Needing to represent his family in the Diet as well as take care of his estate, he resigned from the military at the end of 1838.

When the Crimean War broke out, Aminoff reenlisted and was made a Lieutenant Colonel. There are differing accounts as to what command he held with some sources stating he took charge of the local ethnic Uusimaa Rifle Battalion, while others put him in charge of one of the Russian ‘Finnish’ battalions. He was promoted to Colonel in February 1855 and continued to serve in Finland for the duration of the war.

In 1858 he was appointed inspector of Rifle Battalion station in Finland, this came with a promotion to Major General. In this role, he was part of the widespread reforms of the Imperial Army, helping to bring the army up to par with their western counterparts. In March 1868, he was rewarded for this tireless service to the Empire by being called to serve in Tsar’s Retinue. He was also promoted to Lieutenant General in the same year and assigned special duties within the Finnish Military District.

Aminoff split his time between serving as a General at the disposal of the Finnish Military District and representing his family at the Senate. In 1873 he was promoted to full General, with the appointment of Adjutant-General, helping the Tsar and Imperial Headquarters in matters pertaining to Finland. He would then see promotion to General of the Infantry in May 1882. He passed away in November 1884.

Adolf Aminoff, Biography Center, Finnish Literature Society
Volkov S.V. Generals of the Russian Empire: Encyclopedic Dictionary of Generals and Admirals from Peter I to Nicholas II, in 2 volumes. Centerpolygraph: Moscow, 2009. Information was provided by Ilya Mukhin (Moscow)November 1884.
Imperial Russia Army
On Behalf of the Emperor, On Behalf of the Fatherland. Finnish Officers and Soldiers of the Russian Imperial Life-Guard on the Battlefields of Poland, 1831, väitöskirja, 2014, ISBN 978-952-93-3751-4.