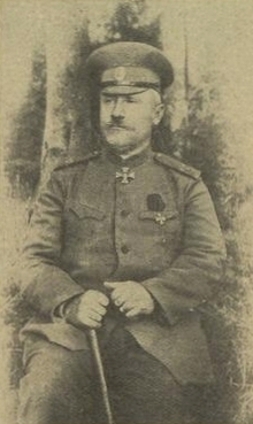 Born to Colonel Alexis Alfthan and Sofia in Bezhetsk, he was destined for service within the Russian Empire. Like his father, Carl entered the Hamina Cadet School, where he gained a general education until 1879. He then transferred to the Nikolai Cavalry School in St. Petersburg where he graduated as a cornet and was posted to His Majesty’s Ulan Life Guards regiment.

In 1887 he attended the Nicholas General Staff Academy, where he showed exemplary skills. He graduated in 1889 and was promoted to the rank of Staff Captain. He soon was given a staff position with the 13th Army and in 1890 was promoted to the position of senior adjutant. His skills as a staff officer were noted and in 1893 he was given a special assignment to serve as a senior staff officer for the Commander of the southern Ussuri region.

Carl was then transferred to the headquarters of the military governor of the Primorsk region as Senior Adjutant in 1895. He wouldn’t be here for long as in the aftermath of the Sino-Japanese War, he was assigned to a 6-month reconnaissance trip to the northern provinces of Korea. His successful mission was rewarded with a posting to the Amur Military District Staff as senior adjutant.

With a promotion to Colonel in 1897, Carl was made Chief of Staff of the 2nd Caucasus Infantry Reserve Brigade, which he faithfully served in for the next six years. In mid-1900 he was assigned to the 45th Seversky Dragoon Regiment to gain experience and familiarise himself with the general management of a cavalry regiment. This was followed by a 3-year appointment as a staff officer in the 66th Infantry Reserve Brigade.

In mid-1903 he was given his first command, a battalion of the Mingrelian Grenadier Regiment. He clearly impressed his superiors as at the end of 1903 he was made commander of the Starorussky Infantry Regiment.

At the outbreak of the Russo-Japanese War, Carl was appointed as commander of the Tengini Infantry Regiment based at Kutaisi, Georgia. However, he didn’t remain long in this postings as by the end of 1904 he was transferred to assist the Governor of Tbilisi as well as head of military control on the Caucasus Railways between Tbilisi and Batumi. The end of 1905 saw his promotion to Major General and in the wake of the Russo-Japanese War, he was made commandant of the Mikhailov fortress in Batumi.

In 1907, Carl was made military governor of Dagestan. His duties were not easy due to the violent clashes between Armenians and Tatars which needed constant attention. But he performed admirably. In May 1908 he resigned and settled in St.Petersburg, it was here he started courting Sofia Mavrokordatos, a daughter of Greek general Dmitry Georgievich Mavrokordato. His retirement didn’t last long though as in July 1909, Carl returned and was appointed commander of the 1st Brigade, 12th Infantry Division. He stayed in this post until May 1914 when he was transferred to command the 1st Brigade, 42nd Infantry Division.

At the beginning of the First World War, Carl was serving as commander of the 78th Infantry Division. Manned mainly by reserves, he led the Division during the Battle of Kraśnik, and despite defeat, he and the Division were praised for their capture of 25 cannons. At the beginning of September, Carl led the 78th Division at the Battle of Rawa, where his calmness and professional manner was noticed by those around him. He was awarded the sword of St. George for his courage during the early days of the war.

As 1915 opened, Carl and the 78th found themselves ordered to delay the advancing General von Linsingen’s South Army at the Carpathians. They successfully delayed the advance long enough to allow for Russian units to regroup and reorganise. During the battles in February, the 78th held off no fewer than four German Divisions near the city of Stryi. For his tremendous efforts, he was visited by Tsar Nicholas II and awarded the Cross of St. George 3rd class, as well as being promoted to Lieutenant General.

In May 1915, Carl was appointed Commander of the 9th Army Corps shortly followed by Commander of the 12th Army Corps. In August of the same year, he was transferred to the 3rd Army Corps fighting in the Baltics. He continued leading the 3rd Army Corps throughout the rest of the year and into 1916, seeing some of the deadliest fighting on the Eastern Front. In April 1916, he submitted his resignation and was granted “dismissal from service for illness with a uniform and pension.” Some sources state it was due to the constant clashes he had with his superiors over the handling of the war.

In June 1917, his wife, Sofia, died and so he decided to move to Rylsk, Kursk Governorate. According to Sergey Volkov’s “Encyclopedic Dictionary of Generals and Admirals from Peter I to Nicholas II”, Alfthan was promoted to General of the Infantry after his resignation, but there is no date given or further information given. As the Civil War erupted across the Russian Empire, Alfthan attempted to stay out of the situation but this wasn’t possible, as in August 1919 Rylsk was captured by the Red Army and he was arrested. According to Finnish sources, he managed to escape but was soon re-captured and imprisoned in Kursk. Showing that the fates favoured him, he was released in September 1919 by the troops of General Denikin’s Armed Forces of South Russia (AFSR) as they wrestled control of the city from the Red Troops.

Not wanting to test his luck, he moved to the Caucasian city of Pyatigorsk where he stayed for the rest of the Civil War. In 1922 he moved to Petrograd (formally St.Peterburg), spending some time (either before or after, depending upon the source) in Moscow. In mid-1923, unwilling to live under Communist rule, he and his youngest son, George, moved to Helsinki. He became one of the leading figures in the Finland branch of the Russian All-Military Union (ROVS), as well as a vocal supporter for disabled veterans of the Russian Civil War. When the Soviet Union invaded Finland in November 1939, Alfthan became the emissary of the ROVS to Finnish Headquarters, suggesting the formation of a ‘Peoples’ Army’ made up of Red Army PoWs and volunteers of the ROVS. While the unit never got far, and political issues hampered the cooperation between the Finnish Military and ROVS, Alfthan was still a regular visitor and confidant of Marshal Mannerheim.