Games based upon the Winter War, or any Finnish conflict, are few and far between. I played Talvisota: Icy Hell way back when I first came to Finland, and have seen several examples at the Game exhibit at Tampere’s Vapriiki museum. So, to find out that there is a project for a new Winter War based game, I was excited, to say the least.

Created by Serbian based Tabletop Game Development Studio, Princeps Games, Freezing Inferno: USSR vs. Finland 1939-1940 is a “map and counter” board game set during the Winter War. From what I have seen it seems a very methodical game, with factors such as weather and diplomacy bringing some really cool mechanics to the game.

Where I could see the Freezing Inferno shining is in how the Calendar cards affect the game. Seeing how certain historical events are handled within the game is exciting, as well as educational. 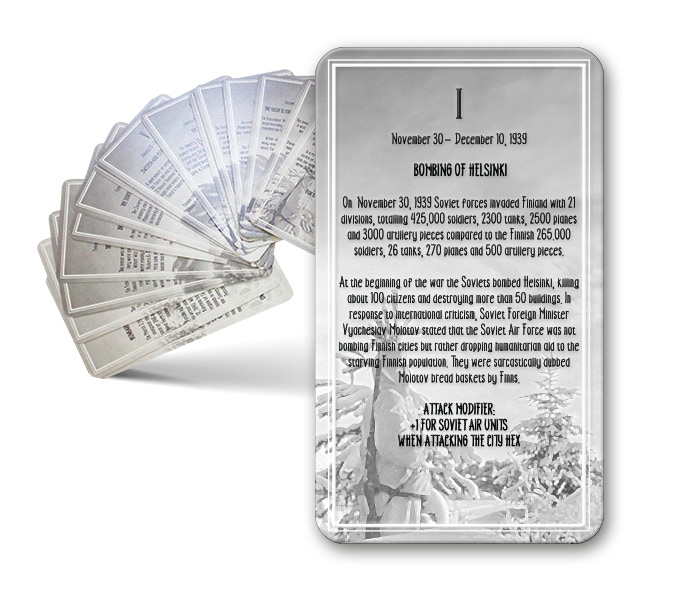 Another nice touch is the additional option of using miniatures instead of counters. There certainly is something awesome about having an actual tank or artillery piece on the board. Not to mention the dynamic stand that has a rotating number system on it to represent strength.

So I reached out to the folks at Princeps Games and asked if they would be interested in answering some questions I had, and they agreed.

I have always been fascinated by board games. Risk was my first board game and since then, I’ve been playing all kinds of military/war-themed games. A few years back my brother Janko and I decided to bring this hobby to another level and after March on the Drina and Downtown Chase, we have our 3rd game – Freezing Inferno. 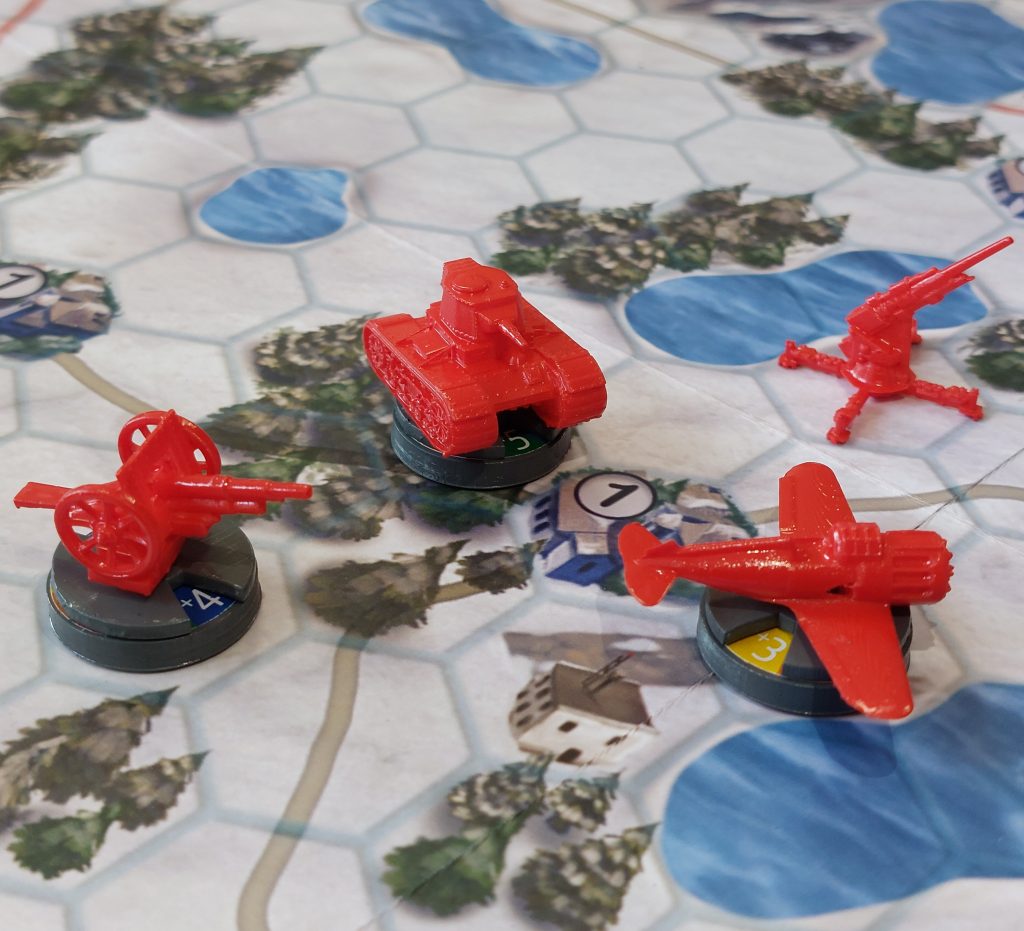 This game has unique mechanics. The battle resolving system is new, interesting and not complicated at all. We got that feedback from playtesters as well as from reviewers. The system requires the players to choose carefully the order of units which will perform the attack and makes the attacker use air units first, then artillery, then tanks and infantry in the end, just like it was in reality. The tension is always there, and you always want to see what comes next.

We were looking for events that had less coverage so we wouldn’t end up with just another game about WW2, and a member of our team, Matt McKean, came up with this idea. I thought it was great, because the harsh winter conditions and a terrain with hundreds of lakes would provide additional flavour to the game and make it an upgrade on our previous project.

My goal was to make a game which will somehow ease the gap between boardgames and wargames. I wanted to make a game which would be deep enough for wargamers, but artistic enough to draw in other boardgamers. I feel that those two audiences have drifted apart and since I am right in the middle, I thought that there must be more people like me and I was right. That is why the artistic look of the game was important to us and we went this way. Creating a good balance regarding this was the biggest challenge and I think we did it.

You never know if your game is good enough until you hear reviewers talking about it. At the moment we have reviews from four serious wargamers and they all like the game! That is the far most exciting part of this journey. I believe that getting a huge number of backers is even more exciting, but we will have to wait and see if it comes to that.

Playtesters were very pleased with the design. Almost all of them pointed out the new system which is something they’ve never seen before. Furthermore, they really liked the possibility to adjust the impact of luck in the game by using custom D20 dice. That is again, something they haven’t found before in a wargame. There aren’t many games about the Winter War, so the theme was very interesting to them, even with the current global situation in the World. 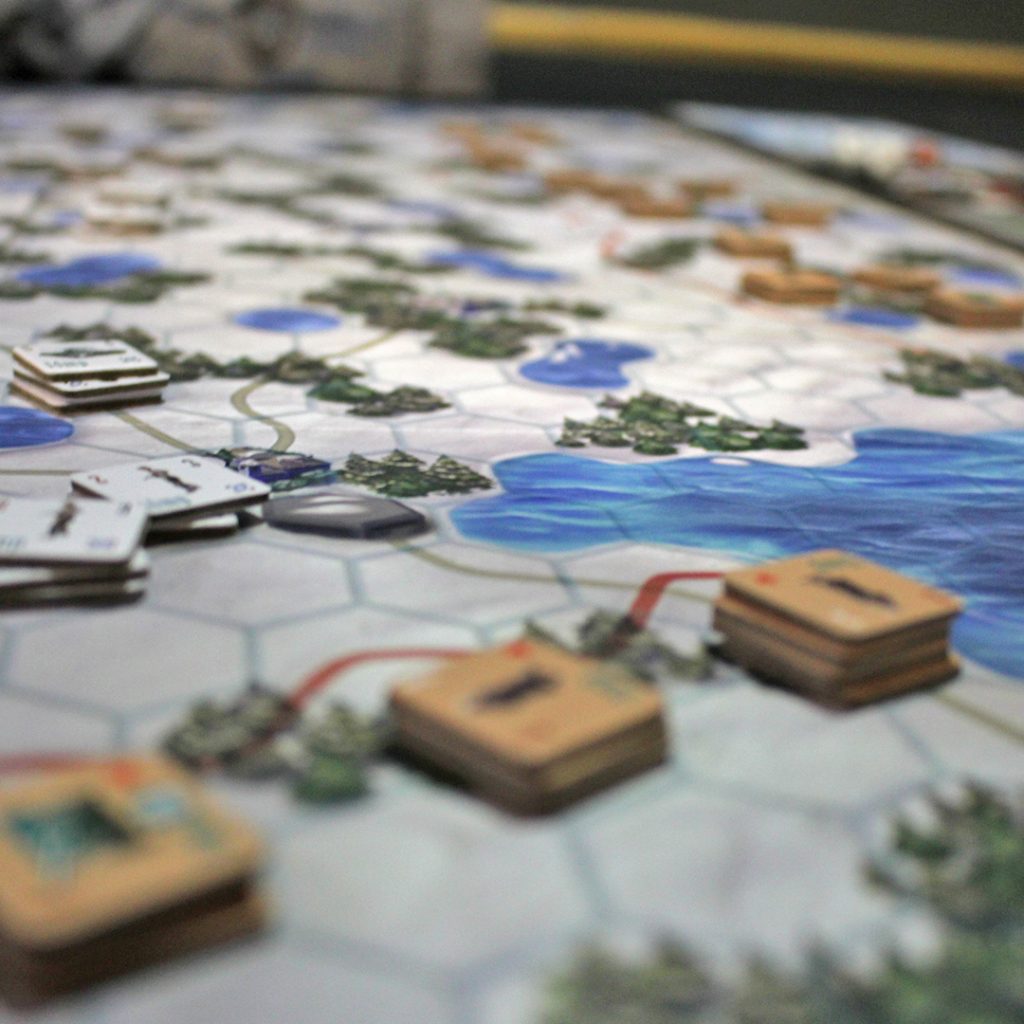 Both players have their objectives. The Soviet player wants to capture 2 out of 3 Finnish key cities, while the Finnish player`s objective is to prevent that from happening. To accomplish that players have 7 types of units at their disposal with different attack and defence capabilities.

Players can expect to get a quality product. The box, the board, the cards, they are all made out of quality material which will endure numerous plays. The secret setup and luck adjustment system bring a high level of replayability, which will make this game a good bargain. 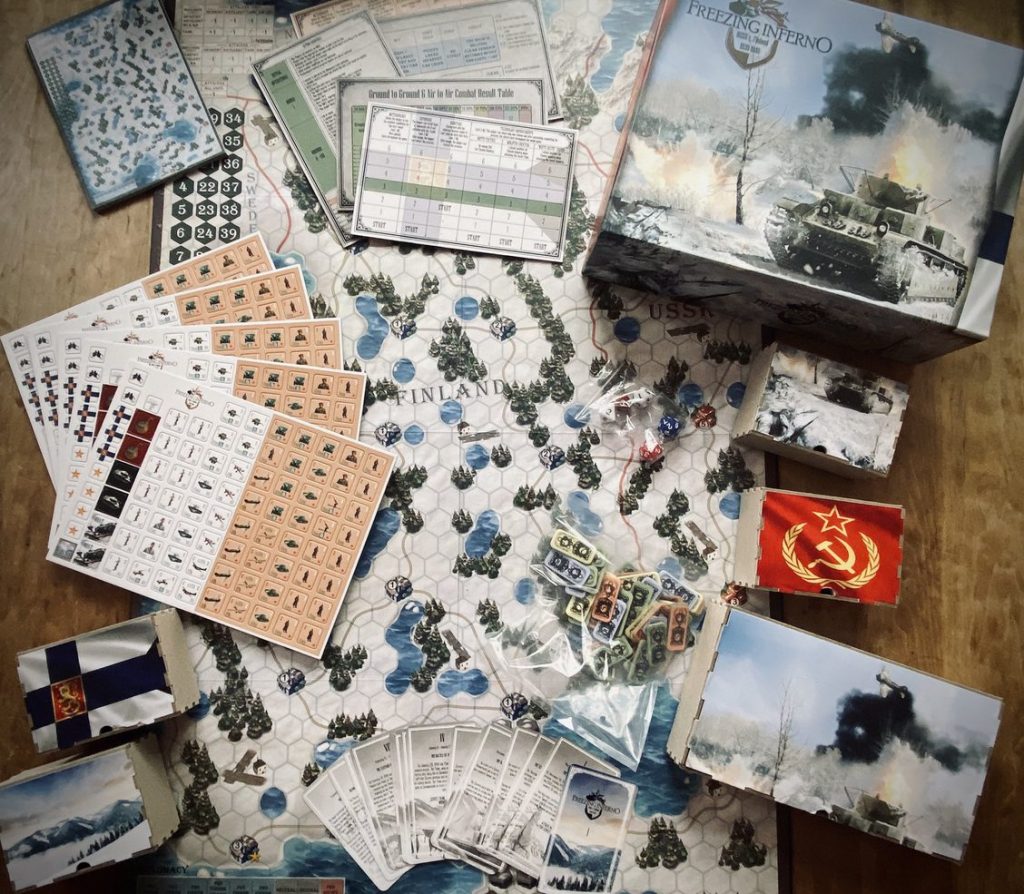 In this way, the strength ratio of the units will have more impact on the result of the battle since the players will have less chance to completely fail (roll 1) or perform brilliantly (roll 8).

We haven’t thought about it yet, we want to wait and see the feedback from the audience first. We did get some good ideas from our reviewers about creating historical scenarios, so there could be some form of expansions, we will see.

The reception was quite good. To be honest, I wasn’t expecting that. I guess people like to see something new and this game offers exactly that. There aren’t many games with this theme, which is probably one of the reasons people are interested. As for the historical element, our goal was to provide enough facts and information to the players, but in a way that it doesn’t fall too heavy on the gameplay and I think we did it.

There are three things which make this game special. The first one is the unique battle resolving system which all the reviewers and playtesters found very interesting and easy to use. The second one is the possibility to adjust the impact of luck by choosing one out of the three dice. This is also something new and unique. And the third one is just a general feeling of harsh winter conditions the players have when they play the game. Many of them told us that they could almost feel the cold and the snow while playing the game, which I think is pretty cool.

Yes, of course. We have considered a few more ideas, but we decided to leave them for future projects. So, keep an eye on our webpage and social media, we will have more surprises soon.

I am all for anything that helps promote interest in Finnish history, as well as brings fun through gaming. I cannot wait to play the game when it comes. Thank you Vukašin Nišavić and Princeps Games for taking the time to answer some of my questions. I’m super excited about the product and have already become a backer of it on Kickstarter.

If Freezing Inferno: USSR vs. Finland 1939-1940 sounds interesting, you can check out the Kickstarter campaign at the following link: https://www.kickstarter.com/projects/princepsgames/freezing-inferno-finland-vs-the-ussr

You can also check out Princeps Games’ website for more information and updates: https://princepsgames.com/